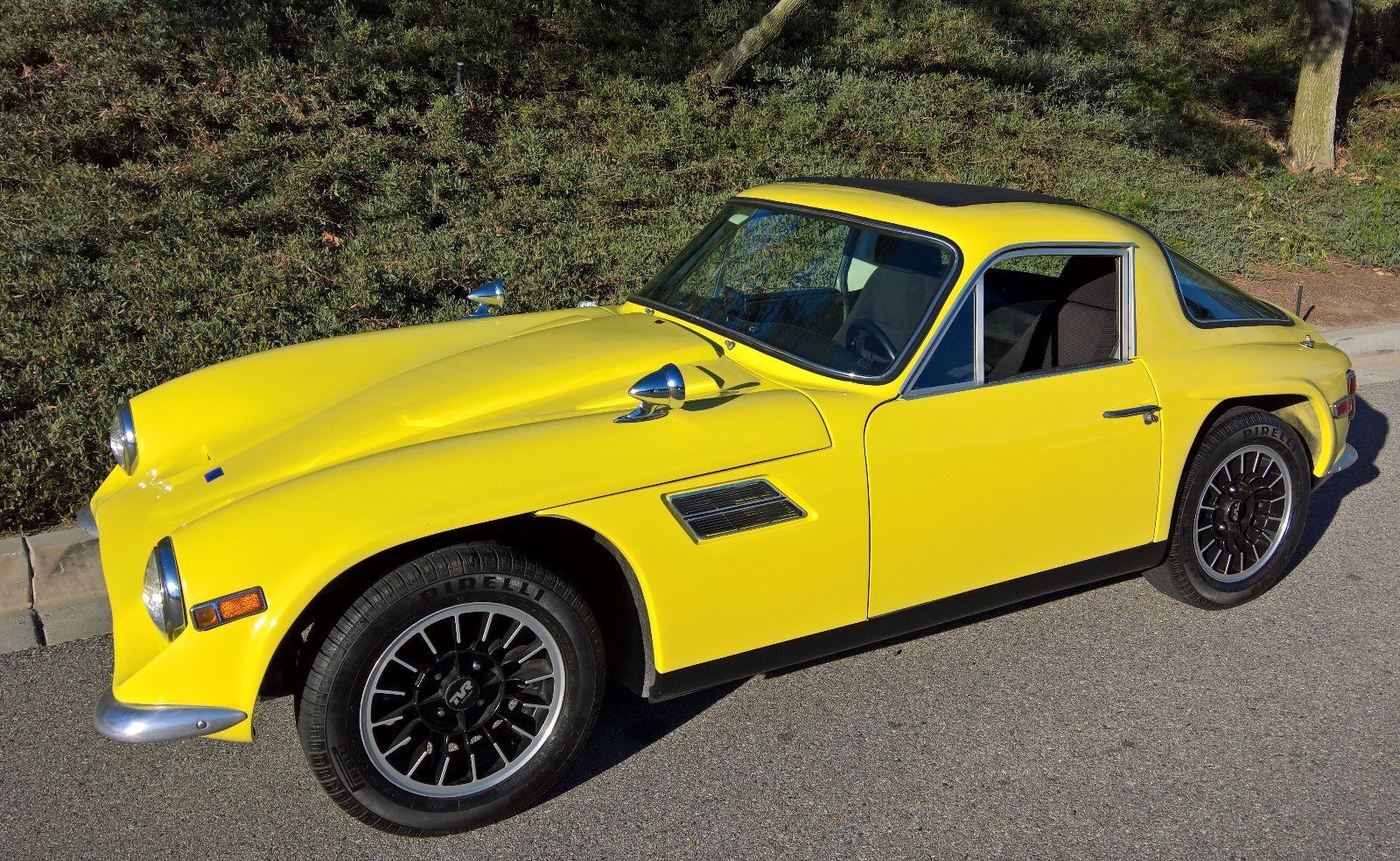 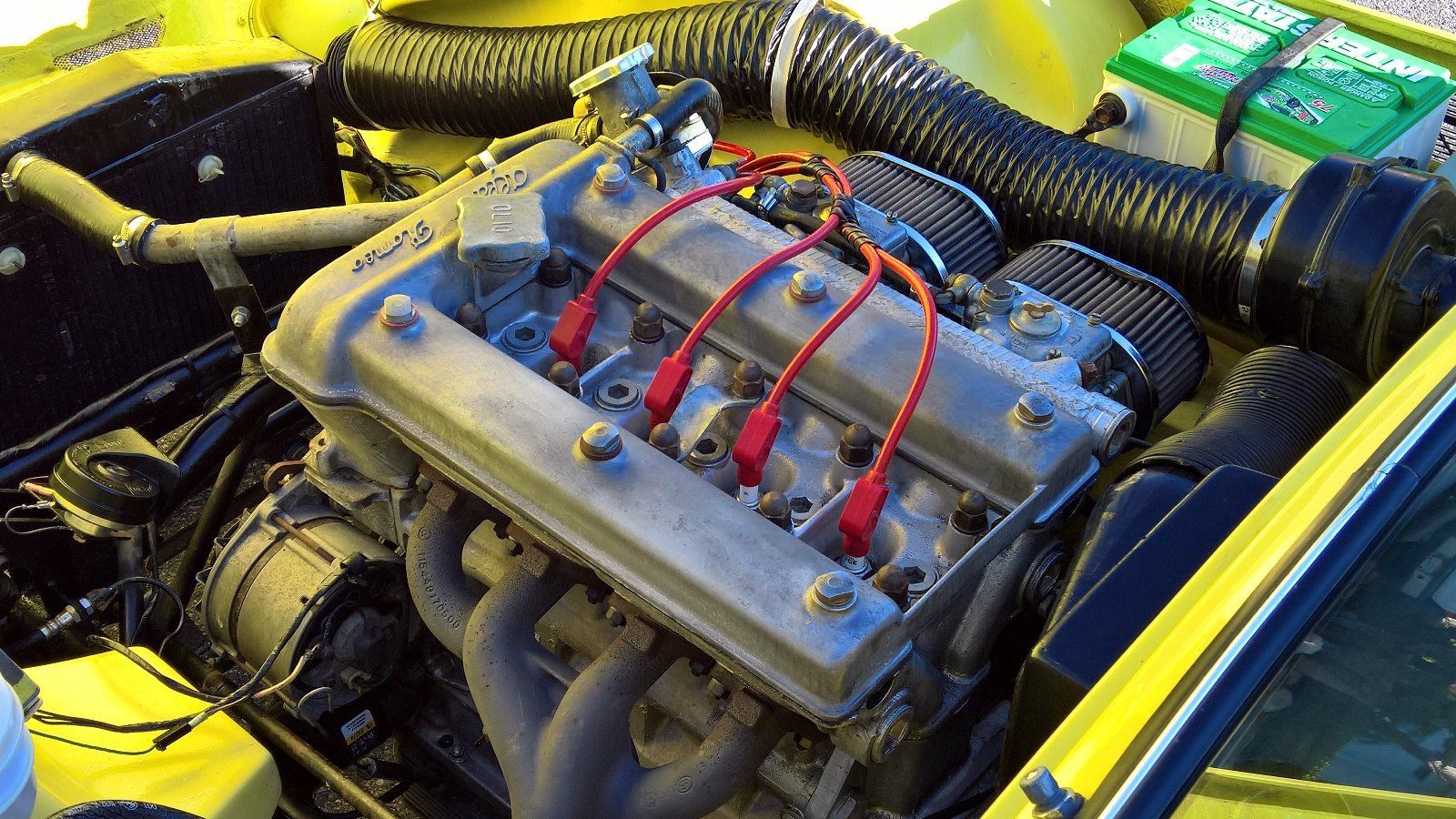 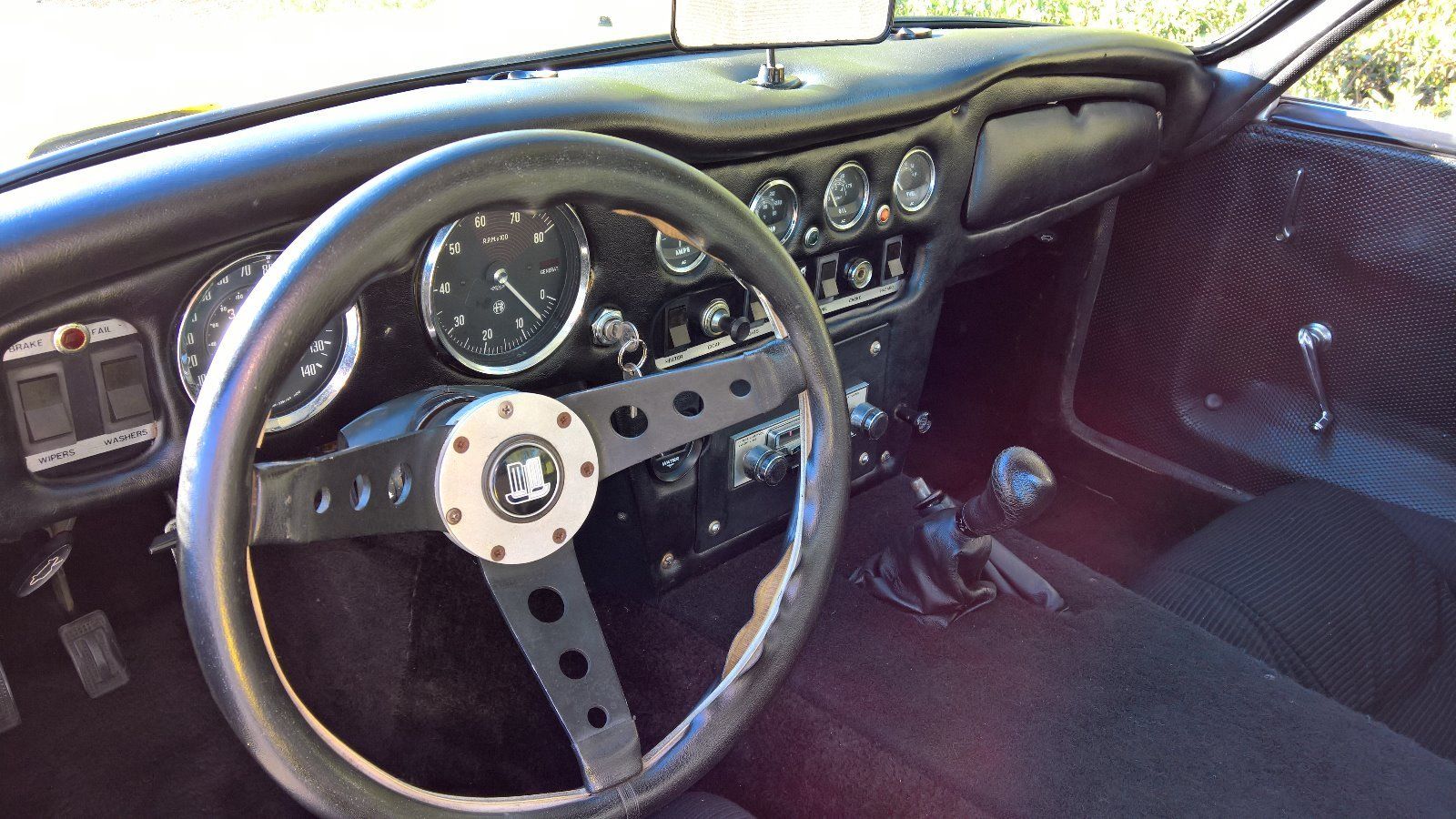 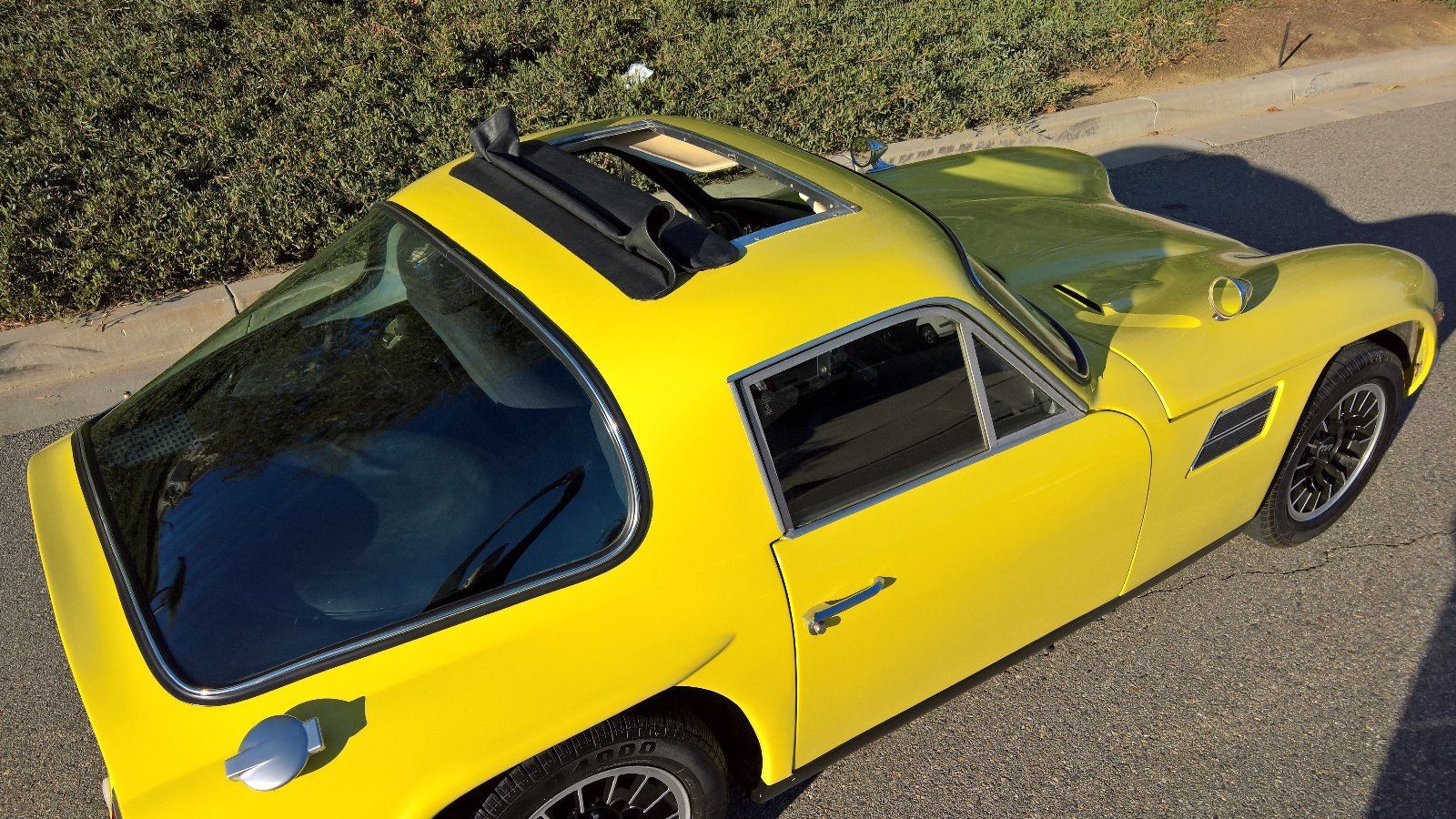 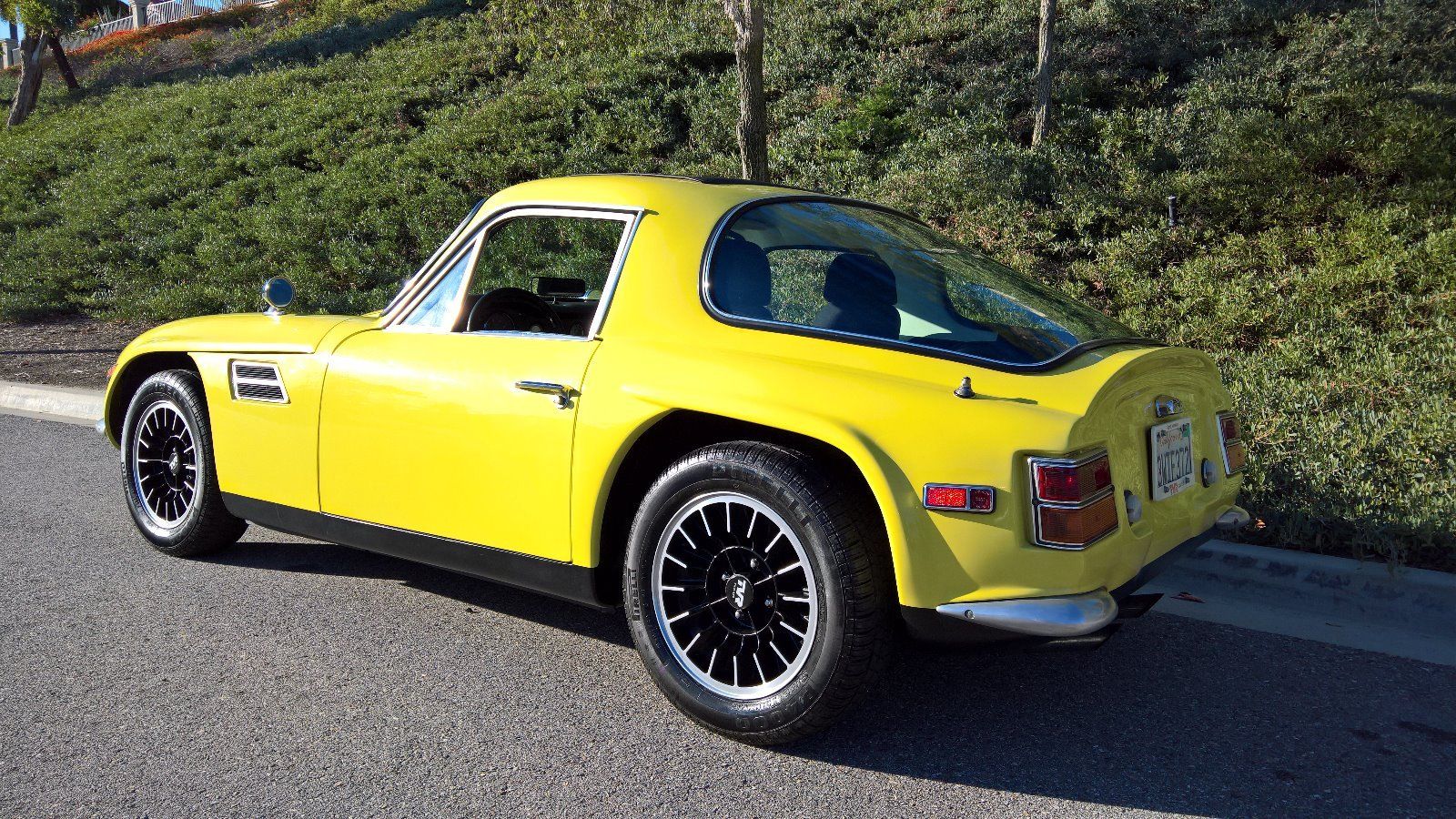 This TVR Vixen 2500 has been
in our family since about 1976, and before we owned it a more distant
family member owned it after having bought it new in San Francisco, CA.
From 1976 onward this car was always garaged and used very sparingly.
It’s now being offered for sale for the first time in all those years.
Here is a great opportunity to purchase an extremely rare car in
excellent condition, with no stories or history of any damage or rust,
and with a highly desirable engine/transmission setup.  We’ve done all
the work for you.


In
1996 she was still wearing her original butterscotch color paint.
While still in good condition we wanted to modernize her looks so it was
repainted in actual yellow, which from our recollection was a GM color
called Canary from the 70’s/80’s used on Corvettes.


While
being an interesting car to drive with excellent handling
characteristics, we always felt that this TVR with the original Triumph
2500 engine and 4 speed transmission was not living up to its
potential.  TVR only used the 2500 engine as a compromise for the U.S.
market because it was emissions compliant, yet this also meant that its
horsepower output suffered, and in various driving conditions this
engine in a TVR was known to overheat far too often.  The 2500 is an
enormously large and heavy cast iron lump, and with twin Stromberg
carburetors it only generated about 106 bhp in the U.S. market, with
driving potential further limited by only a 4 speed gearbox.


After
getting frustrated with one engine related gremlin after another, and
being a very heavy engine with limited performance capabilities (for
example a Chevy 350 V8 weighs just about the same), we decided to have
an engine/transmission transplant completed.  Up through 1972, TVR’s had
been offered by the factory with various 4-cylinder Ford engines of
small capacity, as well as Ford V8 engines (creating the Griffith and
Tuscan models).  They were made to be fitted with a wide range of
engines and sizes.


We
therefore began to think about a period correct engine with an
associated 5-speed transmission, specifically looking for a much
lighter, more powerful and reliable unit.  After having owned and
restored multiple Alfa Romeo’s since the 60’s, and because we also owned
Alfa’s at the time (and still do), it occurred to us that an Alfa
two-liter DOHC alloy engine with an associated 5 speed transmission
would offer vastly improved performance and reliability.  Our Alfa’s
were being serviced by the Sandeman’s at Alfa Performance Connection
(APC) in Laguna Hills (they are now in Orange), so it made sense to go
to Stewart and Stewart Jr.


After
taking some measurements it was determined that only very minor
modifications were needed to install an Alfa engine and transmission.
The motor/trans mounts and one front cross member were repositioned.  In
2003 an Alfa 2.0 engine and 5 speed transmission were both rebuilt by
APC and subsequently installed.  It all fit just right.  An Alfa
tachometer was used, but other than that the stock AC gauges remain.  At
the time of the transplant the odometer showed 10,751.  The odometer
now shows just under 14,600.


With
this Alfa setup our TVR is a real performer.  It now weighs about 200
lbs les than a Triumph 2500/4 speed equipped car, it has 136 stock hp
with the twin Weber’s compared to 106 hp for the Triumph.  The Alfa
engine also revs perhaps 2,000 rpm higher than the Triumph 2500 unit if
need be.  At speeds of approximately 90 mph this TVR will run forever,
nearly loping along in 5th gear with the engine quietly turning maybe
3,500 rpm, which is no strain whatsoever on the Alfa unit.


When
cold, after a pump or two on the accelerator to prime the Weber
carbs she fires up and nearly immediately sets into a smooth idle.  She
drives wonderfully.  Shifting is perfect both up and down through all
gears (Having owned so many Alfas, as other various sports cars, we are
very familiar with shifting Alfa transmissions properly) with the clutch
engaging as it should.  There’s no hesitation or smoke from the engine
at any speed.  She tracks straight and true down the road.  Braking is
excellent.  Steering is precise.

She
handles as well if not better than any of her competition from that
era.  Note that due to the chassis design of these TVRs, the engine sits
well behind the front axle making them a front/mid engine car with
excellent balance and weight distribution.  The track on these cars is
also very wide, and they sit low, so handling is further enhanced.
You’d be hard pressed to find a better handling sports car from this
era.


Did we
mention that being an aluminum engine the Alfa two liter won’t ever have
overheating issues like the Triumph-equipped TVRs had?  There is a
manually operated electric fan installed in lieu of a mechanical fan.
This channels all the engine’s power where it belongs and if you’re ever
driving in very hot weather in stop-and-go conditions the fan is
available via a dash toggle switch if needed .


All
the gauges work.  All the exterior and interior lights work with the
exception of the interior courtesy light.  The twin speed wiper motor
works.  The heater blower works.  The choke cable was removed as it’s
now unnecessary with the twin Weber carbs.  There is an aftermarket temp
gauge that was installed when the car was fitted with the Triumph
engine.  It is disconnected.  When the original stereo is turned on only
static comes through the speakers.  The rear glass is real glass as
from the factory, it’s not a Plexiglas replacement.  This is a valuable
piece as a new glass rear window would cost about $2,500.


The
wheels are the original TVR 15-inch aluminum alloys and they are in
excellent condition, with no curb rash or marks of any note.  The
Pirelli P400 tires were installed at the time of the engine transplant
and have the vast majority of their tread remaining.  The original spare
wheel fitted with some good rubber is covered by the original wheel
cover and sits in its position behind the front seats.


When
the car still had its Triumph drivetrain, we had some suspension work
done by Steve Ferron, who restores, repairs and races TVRs.  After the
engine/trans swap we had David Zumstein of Abingdon West Ltd. service
various aspects of the car.  Mr. Zumstein has restored multiple
concours-winning TVRs and British cars.  Mr. Zumstein also worked on
another TVR we had, a Grantura 1800S.  Stewart Sandeman Jr. has also
serviced the car when needed over the years.


Did
we mention that Stewart Jr. did a compression and leak down test on the
engine in December?  All cylinders read 170 to 180 on the compression
test, exactly where they should be for a fresh engine running as it
should.  For the leak down all cylinders were in the 8 to 15 range
(anything under 30 is considered a fresh engine).  The twin Weber’s were
also cleaned by APC in December.  Mr. Zumstein did work on the brakes
and suspension, including a front wheel alignment.


The
car is fully operational and can be driven anywhere.  We recently drove
it on a 300 mile road trip with no hiccups whatsoever.  There’s likely a
lot we forgot to say, so feel free to ask any questions.  We have all
the documentation and paperwork for the engine transplant and various
subsequent services.


You
may view the link below for 100+ more photos and some video of the car
in action.  Note that in some photos the interior appears a bit gray,
it’s actually black.  Also, in the undercarriage shots you may notice
some water still on parts of the frame due to having just been washed.
There are no oil or fluid leaks.  We purposefully did not attempt to
scrub down the underside and then repaint it to attempt to hide
anything.  There’s nothing to hide here.  The chassis is original, and
rust and accident free, and the body is all original fiberglass with
perfect shut lines.


Be sure to check out the auction for our special Austin Healey “frog eye/bug eye” Sprite.  It is eBay item #

Some bidders have asked about documentation.  Visit the link with additional photos/video


and note the photo of various work orders, etc. that has just been posted.  Thank you