The Honda N600 is a small front drive subcompact, essentially a larger engined version of a Japanese Kei Car built for export to places where a 360cc engine wasn’t salable.  The N600 has the unique status of being the first Honda car ever imported to the US market, making it the grandpappy to scores of Civics, Accords, Integras and Legends.  According to the painter of this one they have sporty  aspirations hiding under a boring exterior.  Find this 1971 Honda N600 for sale in Lancaster, CA for $2,500 via craigslist. 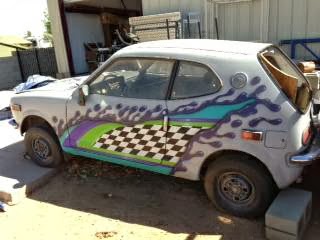 Never before has a car on DT recieved two dead rabbit badges, but today’s example was slow when it left the factory (0-60mph in 19 seconds, top speed 77 mph) and is slower still in its current condition predicament.  The custom paint is set up to look like it is bleeding off the surface revealing a fancy racing job underneath, but the photos are so low res that it could very well be done in magic markers for all we know. 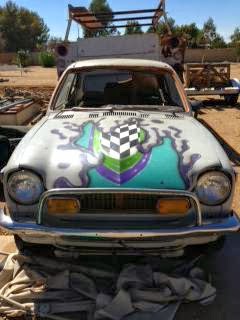 The early ’90s called, and they want their purple/turquoise/checkerboard/water droplet graphics back.

See a something slower? email us here: tips@dailyturismo.com