Ever since I read about Jay Leno’s 1067 horsepower twin turbocharged rear-drive Oldsmobile Toronado, I’ve been obsessed with building my own.  That was a few years ago and I’ve been building a fighting force of extraordinary magnitude website and a family in the meantime, so my Lenoronado is still in early procurement phase (along with my rocketship and volcano lair..etc).  However, if you are ready to pull the trigger on a starting point for an insane project, you can pickup this 1967 Oldsmobile Toronado offered for $5,500 in Santa Clara, CA via craigslist. 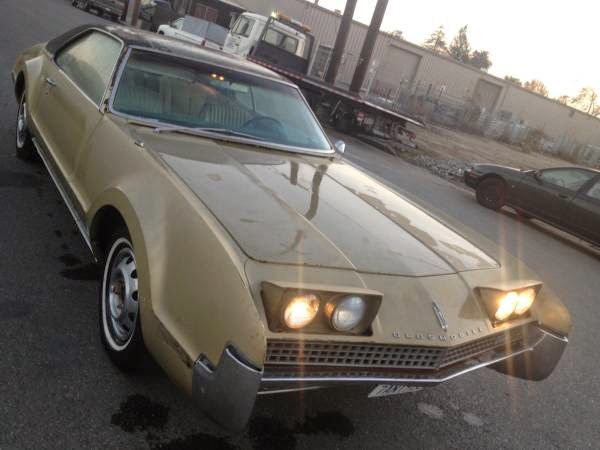 The Toronado was originally launched by GM as a full-sized front wheel
drive personal luxury car to complete with Ford’s Thunderbird.  The
design team put the massive V8 on top of the driving wheels and
marketing team produced all kinds of nonsense about how this was safer
and better for handling.  The monster 455 cubic inch Olds Rocket V8 mated to the front wheels puts
out 375 horsepower and 510 ft-lbs of stump obliterating torque.
Mashing the go pedal from a stop will obliterate the front tires in an
old testament display of godly might and power.

See a better way to impress your neighbors with a cheap classic? tips@dailyturismo.com