The Mercedes-Benz W116 chassis first introduced the world to the legendary S-Class in 1972, S standing for Sonderklasse – or Special Class – as in, unless you are special, you can’t afford this.  The W116 is known today for its incredibly durable interior materials, tank-like build quality and relatively expensive parts/labor costs if something major goes wrong.  This 1979 Mercedes-Benz W116 350SE Eurotrash grey-market example is being sold in San Diego, CA on ebay by one of our favorite ebayers ‘cerealmarshmallows‘. 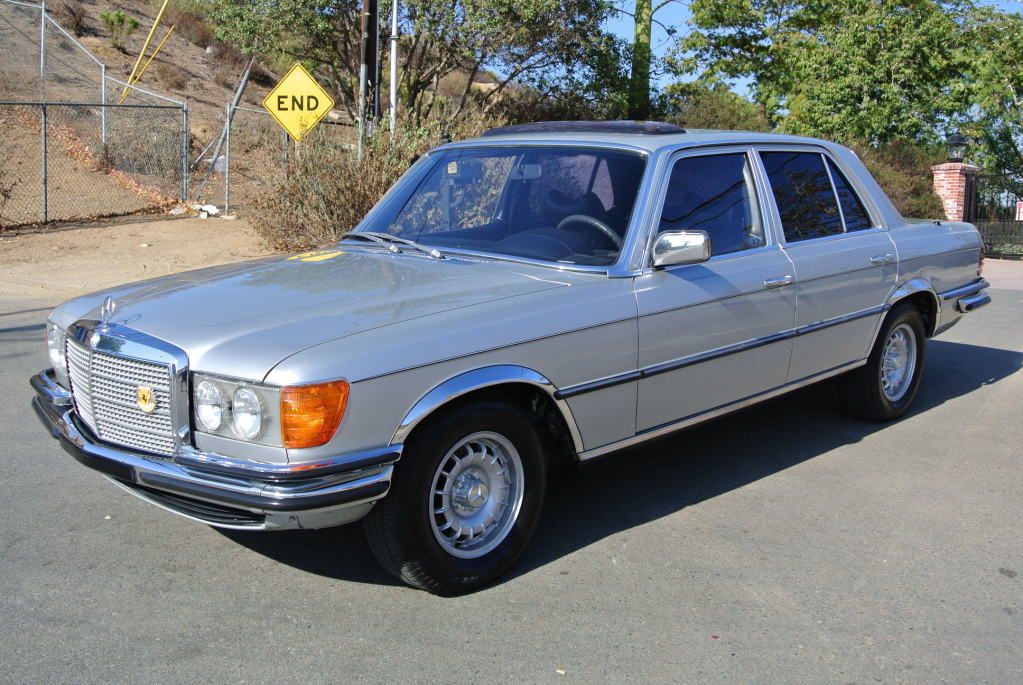 The seller is one of a handful of ebay regulars who live somewhere in the middle ground between car dealer and car flipper – clearly seeking out vintage/cool rides for cheap, buying them -fixing, polishing and photographing.  Currently the seller deals with mostly cheaper $5k-$10k 70s/80s classics, but we assume that if he does seller hardener.com for $1,000,000 he will step up to more expensive cars like 450SEL 6.9 instead of the basic 350SE with Euro bumpers. 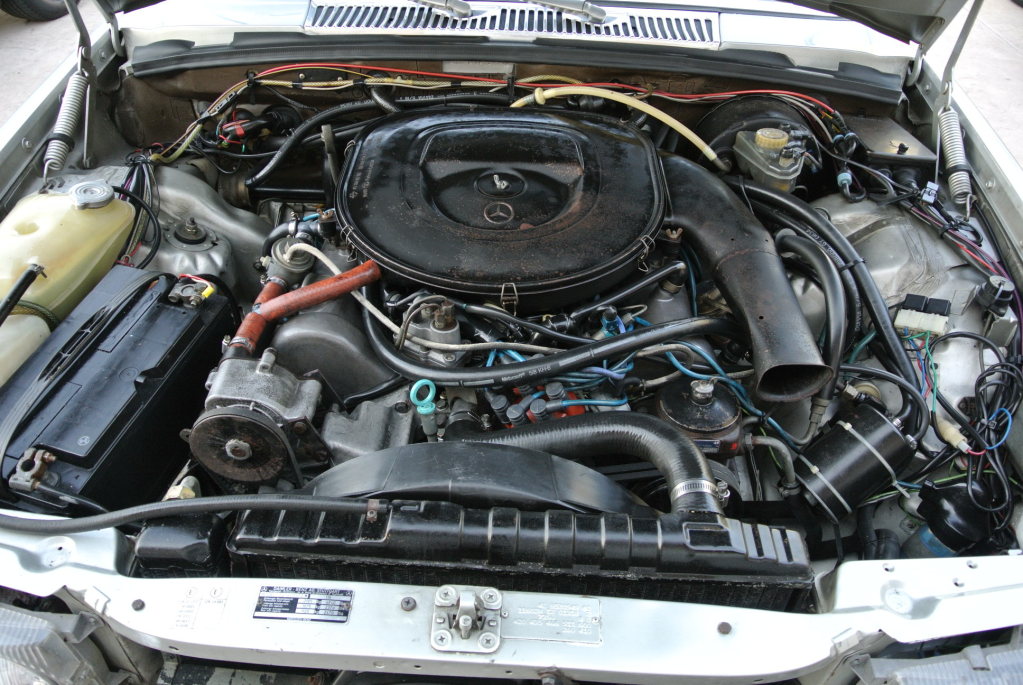 The 350SE is powered by a 3.5 liter V8 putting about 200 horsepower into a 3 speed automatic transmission.  A few comments about this engine bay, first notice the gigantic cruise ship sized battery – that is correct, looks to be a OE Mercedes part, much better to see than than some incorrectly sized Kragen/Autozone replacement.  Next, the engine bay has been cleaned up, but not ridiculously so and its good to see a little bit of rust on the air cleaner housing – too many sellers will just spray new paint right on the housing to make everything look ‘fresh’ – resulting in overspray and nothing is fresher from it. 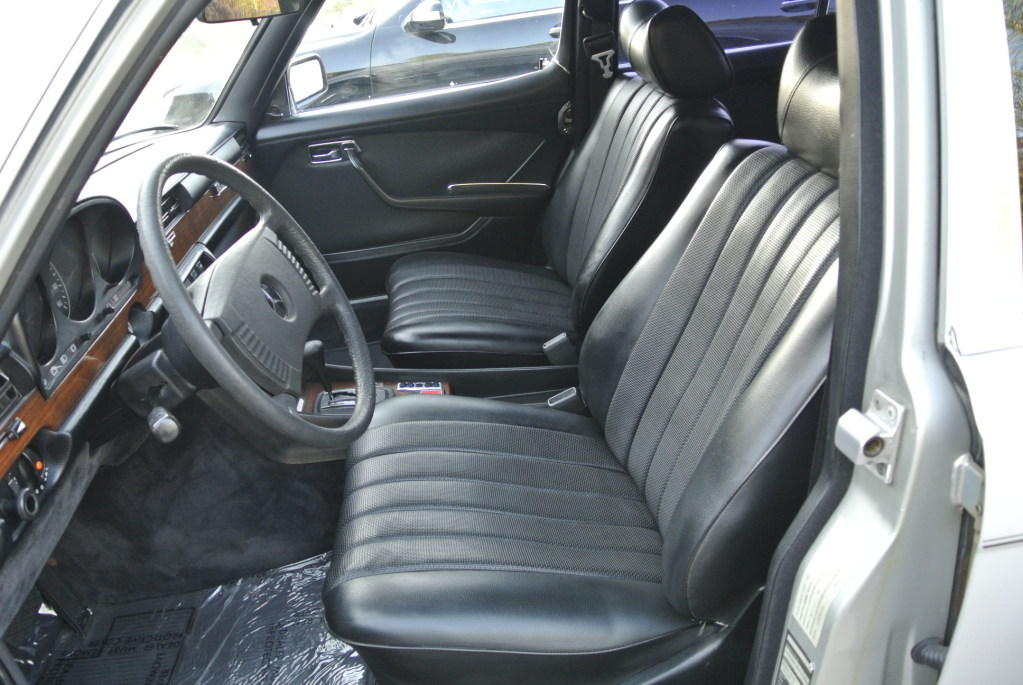 Typical of the era we see the flat seats covered in the original impervious MB-Tex vinyl stuff that will withstand nuclear holocaust.  Steering wheel has some wear, as does shifter handle – again typical for the era and nothing much you can do about it. 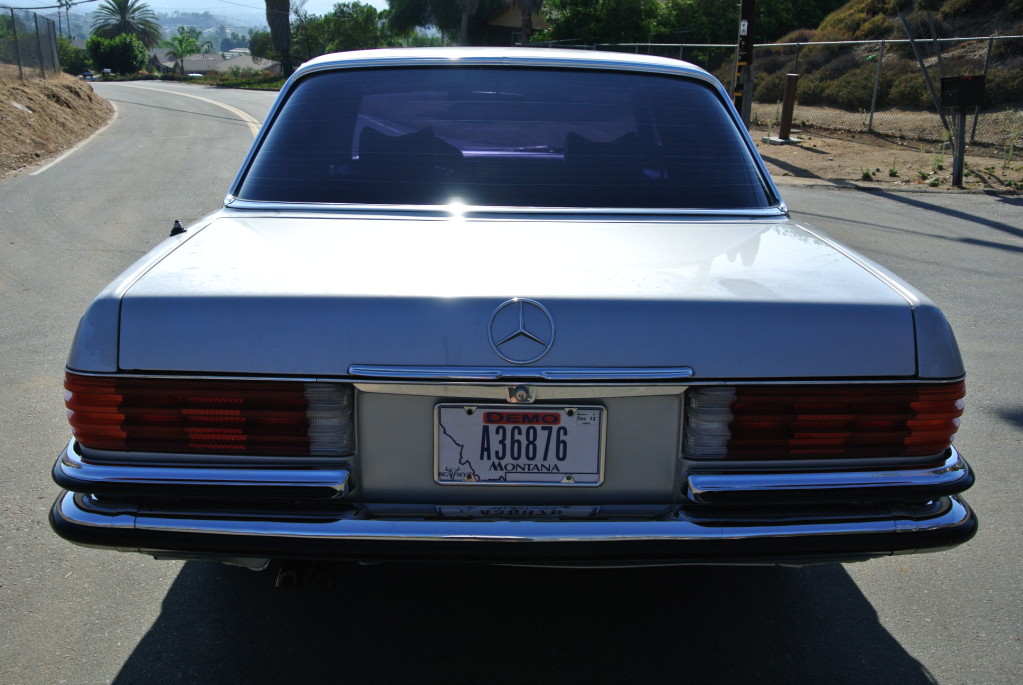 Finally, we love the look of the Euro-bumpers, silver paint, but the tint is looking a bit aged and purple – not a big deal, just needs a refresh.  Also of note is that this car has been debaged of its original emblems on the trunk – indicating it hasn’t always been owned by doctors and little old ladies and personally we would source a set of euro-correct badges and proudly display its 3.5SE name.