In the genre of horror movies there are movies that disgust, disturb and surprise the audience with fantastic creatures and skin crawling special effects, but the movies that are arguably the best are those that hide information from the viewer and allow imagination to take over.  John Carpenter’s 1982 remake of The Thing was a decent expression of this idea, but it pales in comparison to the original The Thing, a 1951 Howard Hawks epic, shot in magnificent black and white.  The original Thing is played by James Arness, and is a giant outer world Frankenstein-esque creature who regenerates limbs like a plant and terrorizes an arctic outpost of scientists (and a few wise cracking ’50s babes).  Viewers are barely shown the beast and brief glimpses only help to generate more uncertainty, anxiety, etc –if you haven’t seen it go pick up a copy from your local video store…wait, do they still have video stores?  I haven’t left my house since I saw John Carpenter’s The Thing in 1982 — really scary film.  Today’s feature 1974 Volkswagen Thing is the polar opposite of the movie Thing as it beats a viewer over the head with a rusty cudgel of gruesome horror. Find it in Greensboro, GA currently bidding on ebay for $9,000 reserve-not-met with 4 days to go.

The Volkswagen Type 181 was sold as the Kurierwagen in Germany but used the name Thing for the US Market – making the answer to “what is that thing?” a simple “yes.”  The Thing used a Karmann-Ghia floorpan and various parts from the Beetle, Transporter, etc.  The Thing was only planned to be a short term stop gap production vehicle until the NATO shared Europa Jeep was developed.  How anyone could expect a bunch of people who routinely riot and stab each other over rival neighborhood soccer games to be able to cooperate to design a mass production light military vehicle is a mystery to me and needless to say the Europa Jeep was a stillborn catastrophe and as a result, more than 50,000 Things were released from the factory. 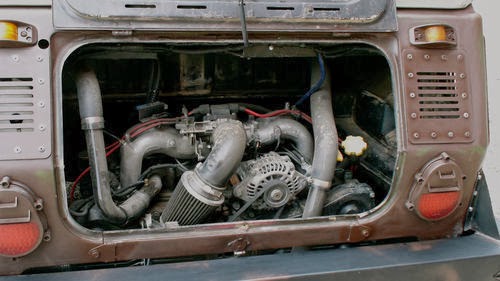 The Thing would have originally come with some sort of misery inducing aircooled flat-four designed to incapacitate the enemy with hysterical fits of laughter, suffocate them with oil smoke & drive them mad with its droning exhaust note – truly the modern day equivalent of a Scottish bagpipe brigade.  Thankfully this flat-4 was used as campfire fodder at burning-man (magnesium crankcase) and the seller replaced it with a 2.5 liter watercooled flat-4 from a Subaru Legacy that he claims now makes 220 horsepower (stock it makes 175 hp). 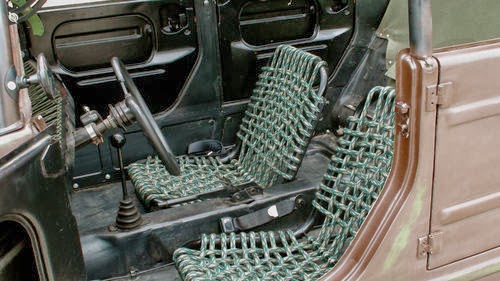 The interior is something built specifically for a masochist… or car magazine photo shoot.  It certainly looks cool, but the first time you try and put a parking receipt on that webbed dash, you are going to wonder what the builder was thinking.  Comfort on the Queen Mary-to-Titanic scale is going to be pegged firmly at 14 April, 1912. 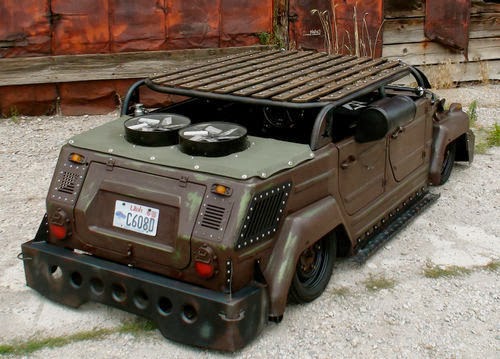 The twin fans pointing upward are indeed functional , they cool the radiators, but the external swamp cooler seems a bit silly in a vehicle without windows.

See a better Horrorod to kickoff the 2013 Halloween season?  email us here: tips@dailyturismo.com